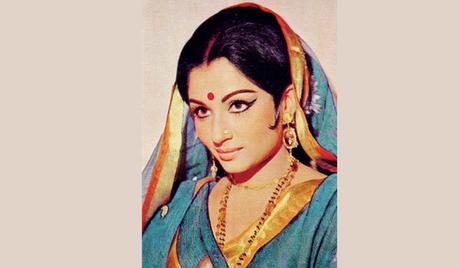 Sharmila Tagore, born in Hyderabad, is an actress in Hindi and Bengali movies. After debuting in the 1959 Bengali film Apur Sansar, Sharmila went on to establish herself as a talented Hindi actress in the film Kashmir Ki Kali in 1964. From then on, Sharmila became a famous symbol in Bollywood, being credited with being the first Indian actress to wear a bikini on screen in the film An Evening in Paris in 1967. Sharmila has been nominated for four Filmfare Awards, of which she has won two, including the Filmfare Lifetime Achievement Award in 1997. She has also won two National Film Awards for roles in Mausam and Abar Aranye. Sharmila was chosen as a UNICEF Goodwill Advisor in 2005. She also was head of the Indian Film Censor Board for seven years from October 2004. Although born a Hindu, Sharmila converted to Islam to marry Mansoor Ali Khan Pataudi in 1969. Together they have three children, Saif Ali Khan, Saba Ali Khan, and Soha Ali Khan. Masoor Ali Khan Pataudi passed away in September 2011.