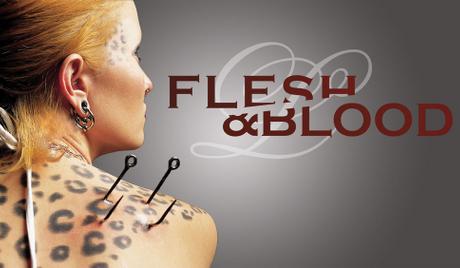 Watch 'Flesh & Blood' with our fast and smooth mobile player, optimized for your phone and tablet

“Flesh & Blood” is Larry Silverman's compelling, critically acclaimed feature documentary about one of the most controversial and legendary practitioners of modern-day radical body modification. A Guinness Book of World Records body modification artist and cult figure, Steve Haworth is a legitimate pioneer in the field, credited with originating techniques for subdermal and transdermal implants. He spawned a worldwide following hooked on his surgical innovations. People come from around the world to his Phoenix, Arizona, home, unsatisfied with even full body tattoos and piercings. Haworth provides subdermal implants: crosses, stars, and all sorts of three-dimensional shapes placed under skin. The transdermal involves delicately implanting a plate under the client's skin to provide the ability to screw and unscrew ornamental objects in and out of the body. Shot over a five-year period, “Flesh & Blood” explores Haworth’s evolution as an artist.