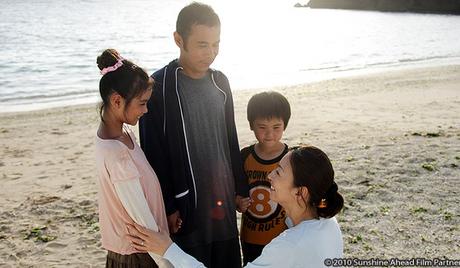 Watch 'Sunshine Ahead' with our fast and smooth mobile player, optimized for your phone and tablet

Some people have the courage to spend their lives fighting for what they believe in. Koji Kinjo (Takashi Okamura) left his hometown of Okinawa years ago but returns home to be close to the beautiful sea that he loves so much. He reconnects with his childhood friend Yuri Kinjo (Yasuko Matsujuki), and they marry and start a family as well as a small business. But when Koji realizes that the sea is being severely damaged by pollution, toxins and other dangers, he abandons his business and risks his financial stability to do something about it, although he faces strong opposition from local residents, environmentalists and developers. But with Yuri’s love and support, Koji dedicates more than 10 years of his life to restore the coral reefs so that the dying sea can be saved. “Sunshine Ahead” is a 2010 Japanese movie directed by Toshio Lee. It is based on the true inspiring story of Okinawa environmentalists Koji Kinjo, who was the first person to successfully spawn coral reefs through transplantation.