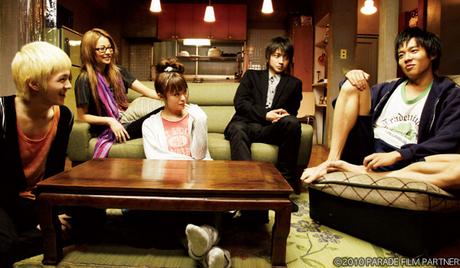 Watch 'Parade' with our fast and smooth mobile player, optimized for your phone and tablet

How much do you really know about the people you live with? Four people who room together in a two-bedroom apartment start to question how much they actually know about each other when the appearance of a fifth roommate and attacks by a local serial killer coincide. Naoki Ihara (Tatsuya Fujiwara) is a 28-year-old employee at a film distribution company. Mirai Soma (Karina) is a 24-year-old illustrator. Kotomi Okochi (Shihori Kanjiya) is an unemployed aspiring actress who waits around for her celebrity boyfriend and Ryosuke Sugimoto (Keisuke Koide) is a 21-year-old aimless college student. The four roommates wake up one morning to find Satoru Kokubo (Kento Hayashi), an 18-year-old male prostitute whom Mirai invited into the apartment after she met him while drunk at a local gay bar. All five seem to get along well on the surface but they all harbor personal secrets that could surprise them all. “Parade” is a 2010 Japanese movie directed by Isao Yukisada. It is based on a novel by the same name by Shuichi Yoshida.