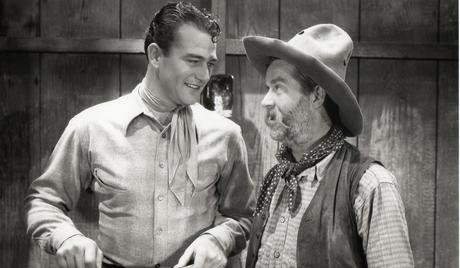 Watch 'Blue Steel' with our fast and smooth mobile player, optimized for your phone and tablet

A Western town sitting on gold may be robbed blind by one of its own. John Carruthers (John Wayne) is an undercover U.S. Marshall who comes to town hot on the trail of the Polka Dot Bandit (Yakima Canutt), who has committed a string of robberies. When John arrives a tad too late for the bandit’s latest robbery, Sheriff Jake (George “Gabby” Hayes) thinks John is the culprit. But the sheriff teams up with John in an effort to find proof, only to have the men discover the true thief in the town who is trying to buy up all the farmers’ land for a pittance believing that there is gold under the land. Can John and Sheriff Jake bring the man who is the real mastermind behind the robberies to justice? “Blue Steel” is a 1934 classic American Western film starring John Wayne and directed by Robert N. Bradbury.