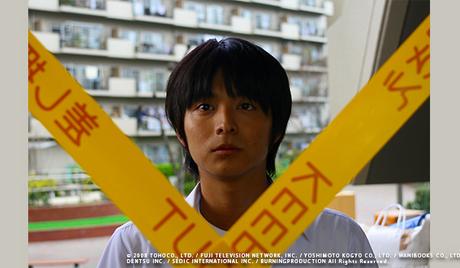 Watch 'The Homeless Student' with our fast and smooth mobile player, optimized for your phone and tablet

Three kids return home from school one day to a shocking sight. The family furniture is lined up outside their front door and a property seizure notice blocks the entryway.

When young Hiroshi Tamura (Teppei Koike) arrives at the scene, his older brother, Kenichi (Akihiro Nishino), is standing there dumbstruck while his older sister, Sachiko (Chizuru Ikewaki), is on the verge of tears. When their father finally arrives, he launches into a jaw-dropping speech: “As you may see, it is with regret that I must inform you we are no longer able to enter our home. It is a difficult situation, but I wish you all the best in your future endeavors. You are dismissed.”

With that, the father disappears from their lives. Because of their father’s reckless borrowing, no other relatives would take Hiroshi and his siblings in. So begins Hiroshi’s life of homelessness.

“The Homeless Student” is a 2008 Japanese live-action television film directed by Hideki Takeuchi. It is based on the autobiographical novel written by comedian Hiroshi Tamura (of the comedy duo Kirin) about his experiences being homeless during high school after his parents separated. The bestselling 2007 novel was also adapted into a two-volume manga by Yoshimoto Books, an elementary student’s book, two live-action television films and a parody film.