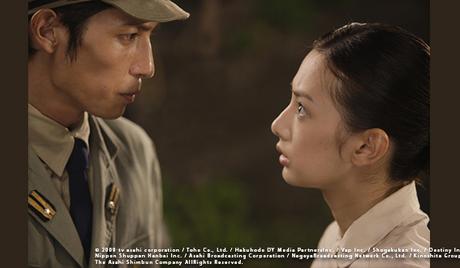 Watch 'Battle Under Orion' with our fast and smooth mobile player, optimized for your phone and tablet

An epic battle between an American destroyer and a Japanese submarine takes place off the coast of Okinawa in the waning days of World War II. Takayuki Koramoto (Hiroshi Tamaki), the captain of the Japanese sub, goes into that final battle with the folded piece of paper containing the music score of a song called “Manatsu no Orion,” given to him by his lover, Shiduko Arisawa (Keiko Kitagawa), as a symbol of their love. More than six decades later, that carefully folded sheet of music is found among the possessions of the American Naval captain who fought against Takayuki. His granddaughter, Izumi Kuramoto (also played by Keiko Kitagawa), tries to find out what happened on that day 64 years ago and why the American Naval officer kept the music for so many years. “Battle Under Orion” is a 2009 Japanese film directed by Tetsuo Shinohara. It is based on the novel “Raigeki Shindo Juukyuu-ten-go” by Tsukasa Ikegami.