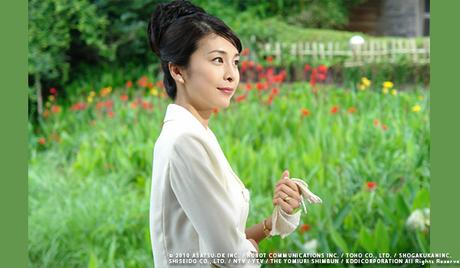 Watch 'Flowers' with our fast and smooth mobile player, optimized for your phone and tablet

Three generations of women owe their lives and the choices they have in life to the courage demonstrated by one woman. During the 1930s, Rin (Yu Aoi) is being forced to marry a man she has never met by her stern father who arranged the marriage, a customary practice of the time. Rin, a progressive thinker who questioned the restrictive lives of women, refused to succumb to the decisions made by others and ran away on her wedding day. Thirty years later, Rin has three grown daughters, Kaoru (Yuko Takeuchi), Midori (Rena Tanaka) and Sato (Yukie Nakama). Kaoru is reeling from the loss of her husband to a car accident, Midori is a staunch feminist who is wrestling with decisions about her career and a prospective marriage, and Sato goes into childbirth with her second child knowing that she may not survive because of her heart condition. Some 40 years later in modern-day Japan, Sato’s older daughter, Kana (Kyoka Suzuki), tries to pursue her dreams of becoming a pianist only to learn that she is pregnant by a man who just dumped her. Sato’s younger daughter, Kei (Ryoko Hirosue), is happily married with a child and tries to live her life to the fullest in honor of the mother she never knew. “Flowers” is a 2010 Japanese film directed by Norihiro Koizumi.