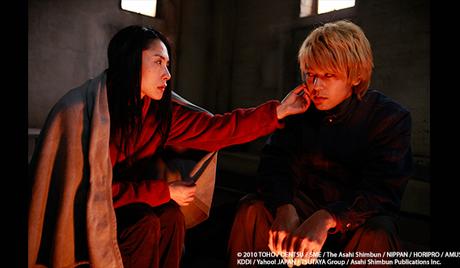 Watch 'Villain' with our fast and smooth mobile player, optimized for your phone and tablet

Some people misguidedly search for meaning and better social standing through sexual encounters. Yoshino Ishibashi (Hikari Mitsushima), bored by her life as an insurance salesperson, engages in random sex with men she meets on an online dating site. But after bragging to her coworkers that she is going to meet her rich college-student boyfriend, Keigo Masuo (Masaki Okada), Yoshino is found strangled to death the next morning. Although Keigo is at first the prime suspect, the police quickly turn to Yuichi Shimizu (Satoshi Tsumabuki), a construction worker from an old fishing village near Nagasaki who met Yoshino online and frequently met up with her for sex. As police actively search for Yuichi, he meets another young woman, Mitsuyo Magome (Eri Fukatsu), online, and they fall in love. Yuichi confesses to Mitsuyo that he killed Yoshino, but Mitsuyo convinces him to run away with her so that they can be together. As these characters – and their shocked and grieving families – are tied together by Yoshino’s murder, can they find what they seek to fill the void in their lives? “Villain” is a 2010 Japanese film directed by Lee Sang Il. The film, which is based on a crime noir novel by Shuichi Yoshida, won the Best Film and Best Director at the 2010 Kinema Junpo Awards and Best Film at the 65th Mainichi Film Awards.