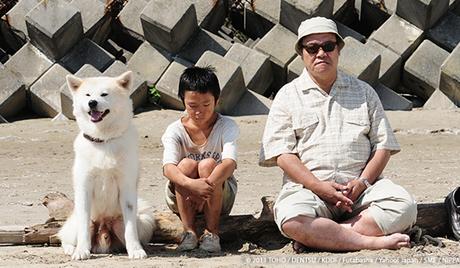 Watch 'Star Watching Dog' with our fast and smooth mobile player, optimized for your phone and tablet

When an unidentified man’s body is found along with his dead dog, the search to retrace the man’s final days teaches life lessons for the young man charged with finding out the man’s identity. Near the camping grounds on a mountain in remote Hokkaido, the dead body of a middle-aged man (Toshiyuki Nishida) is found in his car, along with his dog, an Akita, who died about six months after his owner. Kyousuke Okutsu (Tetsuji Tamayama), who works in the town’s Social Welfare Service Department, is asked by the police to find out the identity of the dead man so that a memorial service can be held. With only a receipt from a goodwill store to go by, Kyousuke tries to retrace the dead man’s final journey – learning along the way that that “Dad” was a man who suffered from a chronic disease and lost his job, his wife and family before embarking on a trip with his dog “Happy” back to his hometown. As the man’s life unfolds in layers, Kyousuke is reminded of his own childhood dog, Kuro, which he only thought of as an annoying “star-watching dog.” “Star Watching Dog” is a 2011 Japanese film directed by Tomoyuki Takimoto.