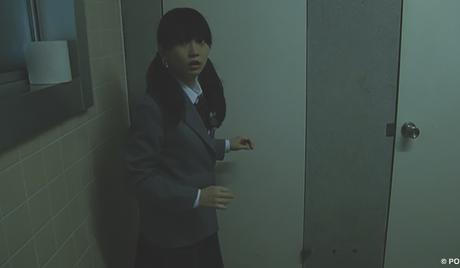 Watch 'P.O.V. – A Cursed Film' with our fast and smooth mobile player, optimized for your phone and tablet

Some scary videos unleash a curse on two schoolgirls that they may not be able to escape. Mirai Shida and Haruna Kawaguchi are students who host a low-budget television program. During a segment about “ghost videos,” Mirai and Haruna watch some video footage that has been sent in by viewers as a camera records their reactions to watching them. The first video shows a bathroom stall door slowly opening as the camera pans to the inside of the stall to reveal nothing there. A second tape shows the same scene except there is a visible hand on the door, but when the camera pans inside the stall, it again shows that there is nothing there. After watching another scary tape, Mirai and Haruna and the crew decide to take a break. When they suddenly start to experience a series of paranormal occurrences, the cast and crew consult a medium, who informs them that one of the girls has been cursed. They are advised to return to the girl’s old school where the videos were shot, but what do they hope to discover there? “P.O.V. – A Cursed Film” is a 2012 Japanese horror movie directed by Norio Tsuruta. It is considered to be sub-genre of horror known as “found footage horror movies,” where the fictional story is presented in a documentary style with presumably found video footage left behind by someone else.