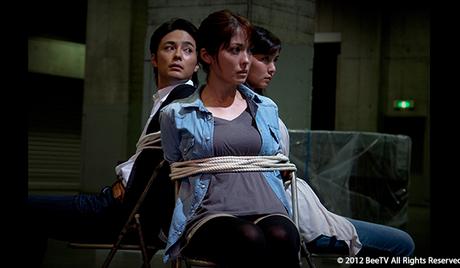 Watch 'The Gold Case' with our fast and smooth mobile player, optimized for your phone and tablet

Three aspiring writers who decide to write a book together suddenly find themselves in the middle of a kidnapping that they would never have been able to conjure up with their own imaginations.

Ruka Sakashita (Aya Hirayama) works for a magazine publishing company but secretly wants to write a book. As part of her work, she meets Tomo Yoshioka (Anna Ishibashi) and Yuuto Iizuka (Ryo Kimura), who share her passion for writing.

When the three decide to write a book together based on a true event of a major fire in Nakanojima, they travel to the city to do research. At a bank, the three friends are mistaken for potential robbers by the security guard, and when they try to escape out the back exit of the bank, they are suddenly abducted by a mysterious organization.

What have Ruka, Tomo and Yuuto gotten themselves into, and will they be able to escape their predicament to get back to their regular lives?

“The Gold Case” is a 2012 Japanese drama series that is based on the popular film “Fly With the Gold.”