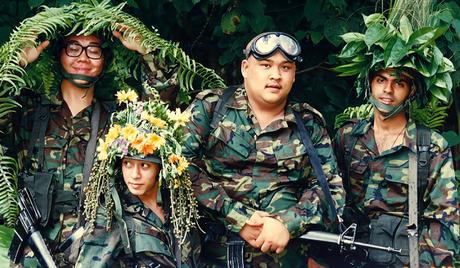 Watch 'Army Daze' with our fast and smooth mobile player, optimized for your phone and tablet

No matter what social class, what educational background or what culture you come from, the Singapore National Service levels the playing field for every 18-year-old who comes to serve their mandatory two-year military service. Malcolm Png (Edward Yong Ching Tah) was pampered by his doting mother and his upper-middle class Chinese background, so the National Service provided quite the culture shock for him. But as he gets used to his new environment, he comes to enjoy army life. Johari Salleh (Sheikh Haikel) is a chubby, rap-loving Malay boy who dreams of becoming an actor someday so that he can meet his idol, Malaysian actress and singer Deanna Yusoff. Krishnamoorthy (Ahamed Asad) is an Indian boy who goes around acting like a hero straight out of a Bollywood movie, and he thinks the National Service gives him the perfect platform to make him a real-life hero. Teo Ah Beng (Adrian Lim Meng Kiat) is a potty-mouthed Chinese boy who resents having to serve in the National Service but is only doing it for the pay. Kenny Pereira (Kevin Mark Marghese) is an effeminate Eurasian boy who manages to make every situation look very feminine. What will it take for the Singapore Armed Forces to make men out of these boys? “Army Daze” is a 1996 Singaporean film directed by Ong Keng Sen. It is based on the 1987 theater play of the same name by Singaporean writer Michael Chiang.