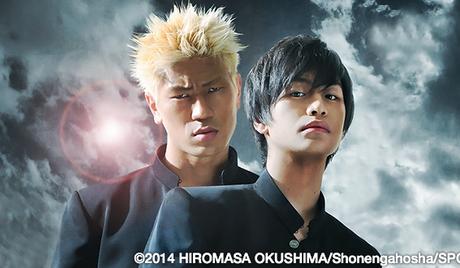 Watch 'Akira No. 2' with our fast and smooth mobile player, optimized for your phone and tablet

If you’re the baddest of the bad, then chances are you belong to the notorious “Numbers” gang at Rikuyama High School. These 10 bad boys have gained a reputation across the nation as being the best fighters. But even within their own ranks, they all have a number. The No. 1 rank goes to Tsutomu Tonarino (Yasuhiro Shiroto), the best fighter among them, and the No. 2 spot is held by Akira Yazawa (Ryota Ozawa), who secretly aspires to become No. 1 but openly supports Tsutomu. One day, Ryoji Fujiharu (Maasa Igarashi), known as “Jessy,” who used to be No. 2 but has been recovering from an accident, comes back to challenge Tsutomu for the No. 1 spot. So does Masumi Furuno (Shota Fukuyama), who goes by the nickname Bucchi. When another group of three boys with white painted faces comes to challenge the Numbers gang, can Akira help save his friends and still try to attain the No. 1 spot? “Akira No. 2” is a 2014 Japanese movie. It was based on a manga series written and illustrated by Hiromasa Okushima.