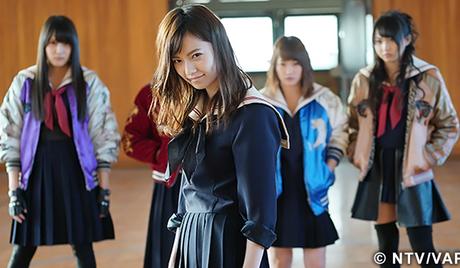 Watch 'Majisuka Gakuen 4' with our fast and smooth mobile player, optimized for your phone and tablet

At the deteriorating Majisuka High School, survival means having to use your fists. A group known as “Rappapa” is the best group of fighters in the school and reigns over the other delinquents and troublemakers. Salt (Haruka Shimazaki) is the leader of the Rappapa and has earned her position as the Queen Bee. But what happens when a transfer student named Sakura Miyawaki arrives at Majisuka ready to challenge Salt’s authority? “Majisuka Gakuen 4” is the fourth season of the Japanese drama series directed by Futoshi Sato that stars the members of the popular girl group AKB48. It originally aired in 2015. The original season first aired in 2010, the second season in 2011 and the third season in 2012.