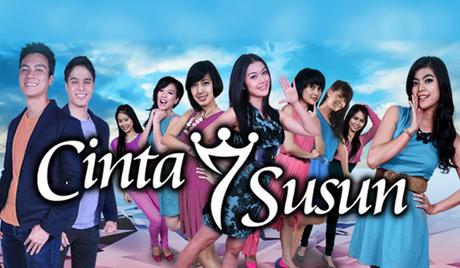 Watch '7 Layers Of Love' with our fast and smooth mobile player, optimized for your phone and tablet

A girl group to the rescue? Six very different women live in the same place — an apartment building known as the Flats RT 7. A.Tee, PJ, Linzy, Natly, Mezty and Grace come from very different backgrounds and temperaments but soon find they share a common goal. Linzy’s favorite girl group is The Barbies, comprising Britney (Raya Kohandi), Milley (Devi Noviaty), Selena (Gege Elisha) and Demi (Shandy Ishabella). When rich girl Britney discovers that The Barbies’ former coach, Danish (Mischa Chandrawinata), used to date A.Tee, she convinces her parents, who own Flats RT 7, to evict A.Tee and the other women and demolish the property. But Britney’s brother Joe (Baim Wong) has his own plans when he gets A.Tee to pose as his fake girlfriend in order to avoid an arranged marriage. Danish and Joe join forces to help A.Tee, PJ, Linzy, Natly, Mezty and Grace — with the addition of Uty (T-Sha) — form a girl group known as 7icons save their home from demolition by entering a singing competition. Can the new girl group beat The Barbies in a sing-off? “7 Layers of Love” is a 2013 Indonesian drama series directed by Desiana Larasati.