Watch 'Bride's Waterfall' with our fast and smooth mobile player, optimized for your phone and tablet

A relaxing vacation turns into a nightmare for eight friends who may not all survive the experience! Tiara (Tamara Bleszynski) is a former wushu athlete who is sidelined after an accident. To relax and get away, she invites her boyfriend, Lilo (Kieran Shidu), and her cousin Mandy (Navy Rizky Tavania) to go on a vacation with her. Joining them are their friends Amy (Mirasih Tyas Endah), Dynar (Nanie Darham), Bram (Andrew Ralph Roxburgh), Icang (Marcel Chandrawinata) and Statchie (Jenny Cortez). On the boat ride to the beautiful Bride Island, Lilo retells the folklore that gave the island its name. Legend has it that a black-magic shaman kidnapped a woman to become his bride. When the locals gave chase, the shaman was cornered at Bride’s Waterfall, where the bride-to-be falls to her death. Angry at the death of his chosen bride, the shaman kills everyone in town. Today, it is believed that anyone who goes to Bride’s Waterfall and makes a wish will have his or her wish come true. As Tiara and her friends make a trip to the infamous waterfall and other parts of the island, a trail of danger and blood follow them. Who will be able to survive this deadly vacation? “Bride’s Waterfall” is a 2009 Indonesian horror movie directed by Rizal Mantovani. 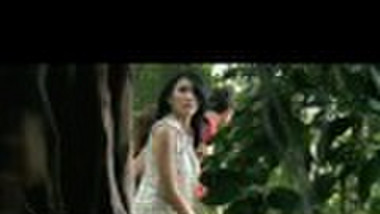