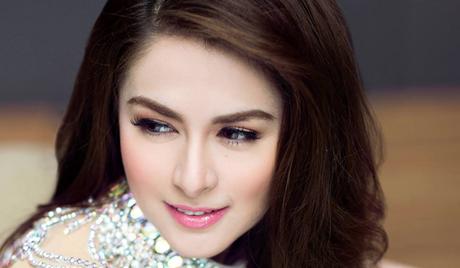 Marian Rivera is a popular Filipina model, singer and actress. Born on August 12, 1984, in Madrid, Spain, Marian Rivera’s father is Spanish and her mother is Filipino. After her parents divorced when she was 2, Marian Rivera was raised in the Philippines by her mother and maternal grandmother. After earning her college degree in psychology from De La Salle University Dasmariñas, she worked briefly in the health care and education sectors before being discovered. Marian Rivera began her career as a model before she caught the eye of a television producer, who cast her in daytime soap operas. Marian Rivera is best known for her roles in the hit teleseryes “Marimar,” “Dyesebel,” “Amaya” and “Temptation of Wife.” As a singer, she also has released two studio albums. She was was named FHM’s Sexiest Woman in 2008, 2013 and 2014, setting the record for winning the distinction three times. On December 30, 2014, Marian Rivera married Filipino actor Dingdong Dantes in a very high profile, elaborate wedding that was dubbed “The Royal Wedding” in the Philippines.