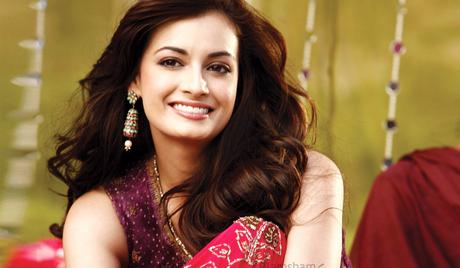 Dia Mirza was born in Hyderabad. After beginning her career as a model, Dia debuted in the film Rehna Hai Tere Dil Mein in 2001. Since then, Dia has also opened her own production house with boyfriend Sahil Sanga and friend Zayed Khan, releasing their first movie Love Breakups Zindagi in 2011. Dia is very socially aware, being active with organizations such as CRY, PETA, and the Andhra Pradesh government to spread HIV awareness. The desi-videsi diva was born of a mixed parentage. Her father was a late famed German interior designer, artist and architect and her mother is a Bengali Hindu interior designer. The death of her father followed her mother’s marriage with a Pakistani citizen and thus she took her title from him. The innocent beauty was the second runner up at Femina Miss India (2000) and this eventually sent her to the Miss Asia Pacific (2000) pageant. Here she won the title of Miss Asia Pacific and completed the trio of India’s win on international pageant in the year 2000 as Lara Dutta won the title of Miss Universe (2000) and Priyanka Chopra won the title of Miss World (2000). She also won the title of Miss Beautiful Smile from The Sony Viewers Choice Award. The brown eyed sweet spoken girl is an utter philanthropist. She is an environment conservationist as well as a socialist. She is also an animal lover and recently adopted two cheetah cubs at Prince Of Wales Zoological Park in Lucknow.