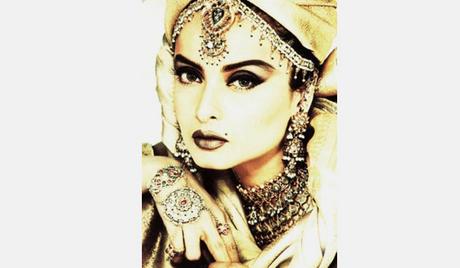 Rekha was born Bhanurekha Ganesan in Chennai to Gemini Ganesan, the Tamil actor, and Telugu actress Pushpavalli. She began her career in 1966 at age 12 in the Telugu film Rangula Ratnam, but her film debut in a lead role came in 1970 Hindi film Sawan Bhadon. Since then Rekha became one of the leading actresses in Bollywood during the 70s and 80s, acting in films such as Ghar, Khubsoorat, and Khoon Bhari Maang. Rekha has won a National Film Award for her role in Umrao Jaan in 1982. She has also been nominated for fourteen Filmfare Awards, out of which she has won four, including the Filmfare Lifetime Achievement Award in 2003. She also received the IIFA Award for Outstanding Achievement in Indian Cinema in 2012. Rekha married Mukesh Aggrawal in 1990, until his passing in 1991. She has not remarried since. Rekha has acted in over 180 films in her 45 year career, making her one of Bollywood’s most prominent actresses.